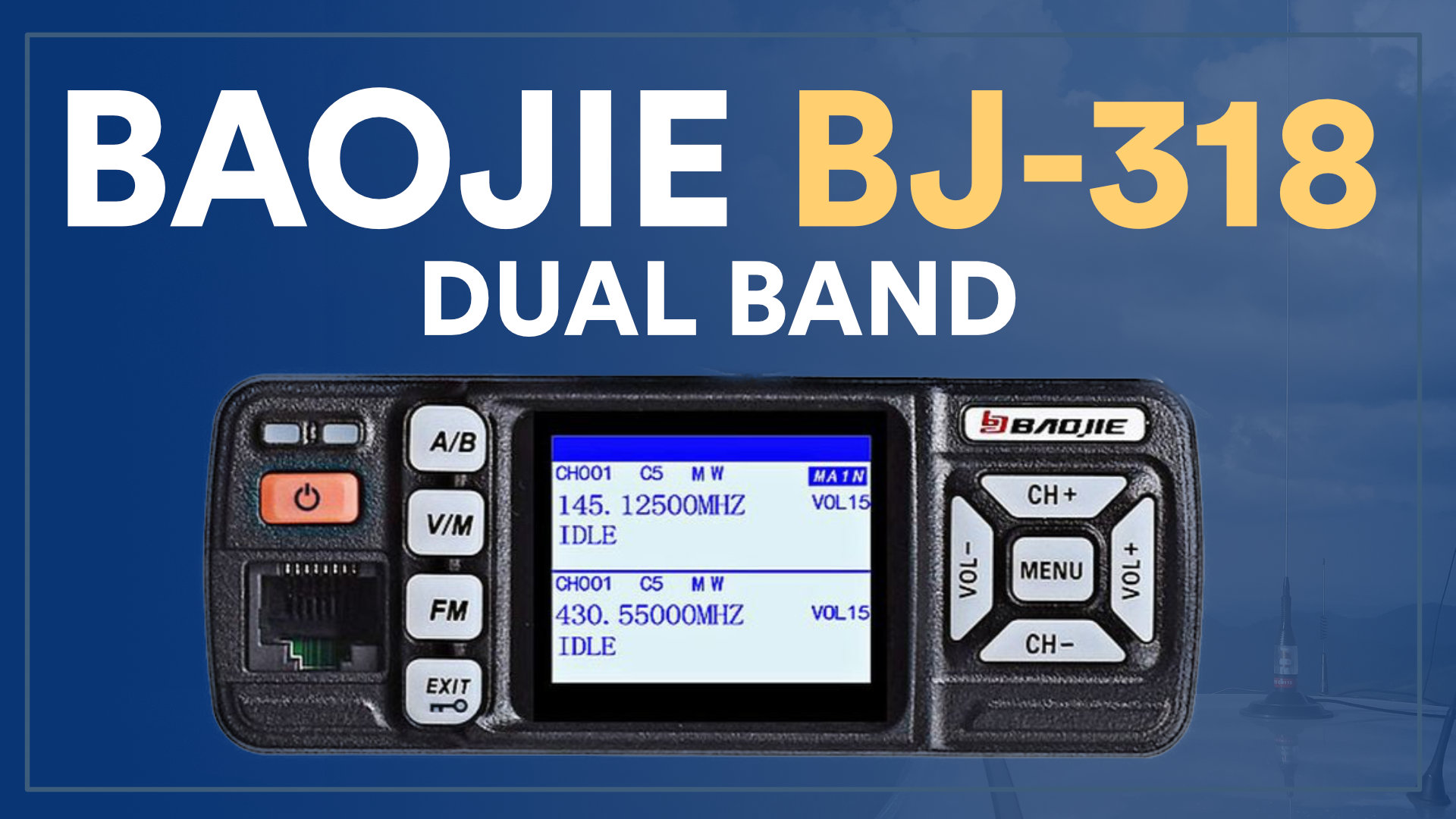 If you ever searched for Chinese radios on platforms like Aliexpress you have probably seen a Baojie-brand mobile radio at some point among all the Baofeng HTs.

There are generally two types of this radio: The BJ-218 with a standard LCD-Display and the BJ-318 with a TFT-color-display. There isn't any other difference between these models as far as I'm concerned.

Both models cost about the same at around 60 dollars including a programming cable on Aliexpress. But I already found the BJ-218 being sold on Amazon for more than $100!

Let's go straight to the pros of the radio and what makes it look promising:

Obviously the TFT-color-display is probably a big part of what makes this radio look interesting.

25 Watts is a nice amount of power. According to the manual it pulls nearly 10 amps at that power though. Power steps are 5W, 10W and 25W.

The radio even has a cooling fan on its back.

I'm a big friend of illuminated buttons myself, especially on mobile radios for night use.

The color tint is a greenish-yellow. All in all I think the color is quite pleasant. The brightness can't be changed, but it's very comfortable as is; even while driving at night.

It is possible to select memory and VFO-mode for the A and B-frequency individually. Even better: You can also switch between displaying the programmed channel name or the channel frequency.

This is a big pro over Baofeng-radios for example.

The mounting bracket is really nicely made. The radio is secured in place by two screws on each side. One screw acts as some kind of pivot point, still allowing it to tilt and the other one completely fixes it in place.

Well then, before you get all excited let's take a look at the cons:

The first time I used it people told me I'm extremely quiet.

It took some time to figure out the correct way to talk into the microphone. I have to completely press it against my mouth

If I get lazy and move away for even a quarter inch I'm immediately getting called out on my bad mic discipline.

As always with China microphones: The sound quality and loudness can be improved by removing all the junk the Chinese build around their microphones on the inside and by drilling up the mic hole. I haven't tried it yet, but there reports that this indeed works.

But be sure to still have some kind of pop protection e.g. a layer of textile between the mic hole and the capsule.

All the beeping sounds on this radio are absolutely eardrum-rupturing. Especially the power-on-sound. It can even be heard outside of the car from many meters away (with closed doors of course).

I'm a friend of key beeps as well, but it's the same with them. Every keypress creates a beep so loud, it's already inducing ear pain.

The key beeps can be turned off, but I don't know about the power-on-tone. Haven't tried it out, but there is a chance it's linked to the key beep setting.

S-Meter is a fancy-looking "BUSY"-indicator

As soon as the squelch opens up it shows S9 continously (nice feature for contests though HI). When the squelch is closed it shows nothing.

Another big disappointment is the realisation that the TFT-display is not really much better than the LCD-version.

In general I think that LCD-technology is superior to TFT, at least in this area.

The display is small and the font is even smaller. It's hard to read from a distance and it's obviously bright because of the screen backlight.

There isn't really much more information displayed on the TFT compared to the BJ-218 with the LCD. You just see the indicators for W/N, power level or tone squelch settings for both A and B at once. But that's it. Enormeous whitespace on all of the display.

My guess is they wanted to "go with time" and make the radio look modern so more people buy it. It's the same shitty firmware the BJ-218 has with support for the TFT-display being lazily added.

Keep one thing in mind: The next three issues including this one, are not limited to my specific radio I got. There are countless reports of the same problem over and over again. Following issues are the norm, not the exception!

The receiver sometimes crashes seemingly random. It just stops receiving. When that happens the S-Meter "Busy-indicator" also lights up continously but no sound can be heard. I think even normal interference (QRM) can cause this.

Pretty annoying if that happens without you noticing immediately. And it's not even something that only happens rarely.

After restarting the device it works again.

"Modulator" stopped working once too

Once it even happened that the radio sent out a carrier but didn't modulate an audio signal on it. It just transmitted empty carriers. The receiver still worked this time so the other station was able to point out the malfunction.

In this case a restart also "fixed" it.

Goes crazy when transmitting next to it with another radio

HF easily radiates into the BJ-318 and messes things up. The display begins displaying all kinds of strange artefacts and usually the receiver dies after a few seconds.

As always: Restarting fixes it.

The speaker pops whenever sound starts and stops playing. It's just a sign of poor quality.

Interference breaks through the squelch all the time. Sometimes it even stays open for a prolonged time while blaring out some rattling interference noise. It's god awful.

The keys are soft and weird to press

I don't know how to describe it, but the keys feel "mushy". They are made of really soft rubber and as such also compress a lot when you click them.

They are not really standing out from the housing too, to begin with, so that's what makes it a bit awkward to press the keys.

Something is wrong with the squelch

Listening to weak signals is a pain on the BJ-318. Something is not quite right with the way the squelch is handled. It must be a too low (or probably non-existent) hysteresis or delay.

Sometimes the squelch opens and closes multiple times a second.

Chirp only supports the BJ-218

There is no option for the BJ-318 in Chirp. But it can be programmed using the BJ-218-option.

The character limit for channel names remains at 7 though! I haven't found any other free programming software, so it seems you can't even take advantage of the space on the TFT.

The text-color can be changed for A and B individually. Available colors are black, purple, green, red and blue. Though different viewing angles on the TFT make the color tint shift dramatically.

So, switching on the ignition in the car will start it. I don't know of a radio that doesn't act like that but I just confirm that it works on this model.

Channels are programmed for A and B individually

There is not an option to make programmed channels available for both A and B as far as I'm concerned.

The Baojie BJ-318 is a god-awful radio. Stay away from it as far as you can. It's the worst radio I ever had, even worse than any Baofeng. Baofengs at least work.

If you absolutely want a Baojie-radio, for whatever reason that is, you are probably better off buying the BJ-218 with LCD-display.

The BJ-318 is probably only made to look modern and the TFT is implemented with the least possible effort.

The BJ-218 is also the only one I found being sold on Amazon. Maybe that means the BJ-218 is still more robust than the BJ-318, which perhaps didn't pass quality checks.

If you have further questions about the radio, please feel free to ask them in the comments and I will do my best to answer them.

An alternative would be the Leixen VV-898 in the same price category. It's probably the best dual-band mobile radio you can get for under $100. A review like this is coming soon. It's also the only radio under $100 I found that has an actual, working S-Meter.